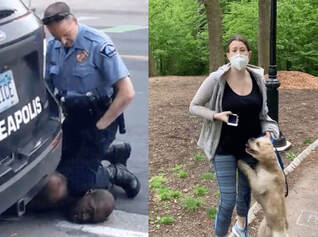 So much tragedy, destruction and despair has come upon us in a very short amount of time. The events that recently occurred has pretty much put my feelings and emotions in a ‘different’ place now!

I sat and watched a ‘brother’ of my color forcibly placed on his stomach, handcuffed, and ignored while he called out to his mother (who passed away a couple years before) for help!

The brother was calling for his deceased mother because he had 4 police officers over him… pinning him down; one of the officers had his left knee and the full weight of his body pressed against the back of this brothers neck…………….FOR ALMOST 9 MINUTES!!!!!

This brother pleads, “I can’t breathe, I can’t breathe.. my stomach hurts,…. Mama, Mama, help me please, they’re gonna kill me”. His pleads were immorally ignored by the 4 officers. Approaching the 9 minute mark, you can see this brothers body go limp.. while the full weight of the officers knee pressed against his neck. You can also see the officer who was holding down the brother legs reacted to a bystanders comment, (“Let him go, he’s limp,.. you killed him”) by walking over to the brothers head to check for a pulse,… and this is while the full weight of the other officers knee on his neck.

I’m in a great deal of pain right now; even though I already knew the outcome, I screamed at my television, begging the officer to get off the brothers neck! I saw this brother dying right before my eyes. What I didn’t see….. was an ounce of concern, empathy, compassion or moral compass from any of the 4 police officers!!!!!

The brother, ‘George Floyd’ was pronounced dead moments later!
Adding to my heartache…….


I see a ‘brother’ bird watching in central park… he notices an individual who had her dog unleashed in an area of the park that requires all dogs to be leashed. The brother asked the individual to leash her dog; once the brother saw the individuals demeanor, he began to video record her and the situation.

I don’t know if it was her feel of self-privilege, or her unexplained ignorance….. knowing she’s being recorded, the individual proceeded to call the police and say the following, “Hello, I’m in the park and there’s an African American here threatening me and my dog… please hurry”; the individual said this 3 times,.. and each time, her ‘Oscar Performance’ heightened into an utter life or death situation,.. thus screaming in fear in the phone! Mind you, the brother never moved from where he was standing,… and the individual had walked about 15 yards away from the brother while on the phone with the police.

During her entire time speaking with the police, her poor dog was literally getting strangled. The individual finally leashed her dog, and the brother said, “Thank you” and went on about his way.

I don’t want to think had this brother stayed at that location when the police arrived.. and NOT recorded this individual (white female) and her Oscar level performance while speaking with the police on the phone,… What would have been the outcome??? I’m sorry to say, this is a rhetorical question… NOTHING good would have come out of the situation for this brother!

Until this racial virus affects & impacts the people who are 'Privileged' and who's looking from the outside,....
​    CHANGE will NEVER happen!